The Dutch parliament announced at 10 September 2019 an end to natural gas production in Groningen province by 2022. The same day agricultural initiators of Windpark Oostpolder within this province signed their wind turbine purchase contract with German supplier Enercon.

The Dutch parliament announced at 10 September 2019 an end to natural gas production in Groningen province by 2022. The same day agricultural initiators of Windpark Oostpolder within this province signed their wind turbine purchase contract with German supplier Enercon. The contract comprises thirteen turbines, twelve destined for Waddenwind BV and one to Gijzenberg Windenergie BV. Selected turbine model is the 4.65MW E-136 EP5 featuring 136-metre rotor diameter that comes with 155-metre hub height. The windfarm will generate over 200 million kWh in green energy annually, sufficient to cover the electricity use of 50,000-plus Dutch households. It will therefore become a substantial contribution to the province’s sustainability goals.

Windpark Oostpolder is named after a polder (reclaimed land) with the same name, located to the south of Eemshaven port. The project site stretches between railway track Spoorlijn Roodeschool – Eemshaven and the Rijksweg N33 main road.  The twelve Waddenwind turbines will be situated in the Oostpolder’ eastern section, and the remaining Gijzenberg turbine just outside its southern border. Another eight E-136 EP5 turbines are in a planning stage within the Oostpolder’s western part. 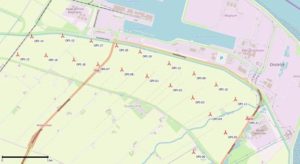 The contract signing represents an important step towards the realization of this major windfarm, of which the construction start is in summer 2020. Unique is that the project combines Enercon- and Lagerwey-specific joint know-how and experience, like through the deployment of the self-climbing Lagerwey Crane. The latest enhanced crane model version can hoist all main components of the new EP5 turbine platform (based on the original Lagerwey L136 LP4) including the heavy ring generator. Notable is that EP5 head mass (nacelle + rotor) has doubled compared to the 2.5MW Lagerwey L100-2.5MW LP2. First power will be generated in the second half of 2020 with windfarm commissioning expected for 2021.

The management board of Waddenwind BV has been successful in developing this major project in an effective efficient manner, through the joint efforts of all agricultural entrepreneurs involved. Activities included close consultation with local communities and the Oudeschip cooperative renewable energy society aimed at together realizing a locally supported wind project.